What is the core? It is the main control screen for the entire simulator. The core allows the flight director to see what all of the crew does with their stations and respond to it. The core is also how the flight director provides information and direction about what is going on during the mission to the crew.

The core screens (outlined in the next pages) are configured to give the flight director flexibility as you control certain aspects of the simulator: controls, viewscreens, messages, etc.

Most of what the flight director will do with the core will surround the mini-core components that control individual aspects of the simulator. Nearly every card has its own core which is used to control it. Each of the cores are described on their corresponding card doc page, with a few cores that have their own documentation page. 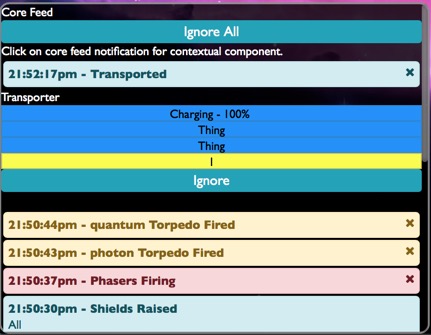 One of the most powerful features of the core is the core feed. This is available on the main screen of the Next core layout and on the side bar of the Default and IIFX cores. This provides a feed of notifications from the simulation. Each notification in the core feed can be expanded to show the corresponding core for that notification. Shown above is the expanded transporters core. This can allow the flight director to respond to contextual events without having to search for the necessary core component.