Sensors is easily one of the most complicated, neuanced screens in Thorium. 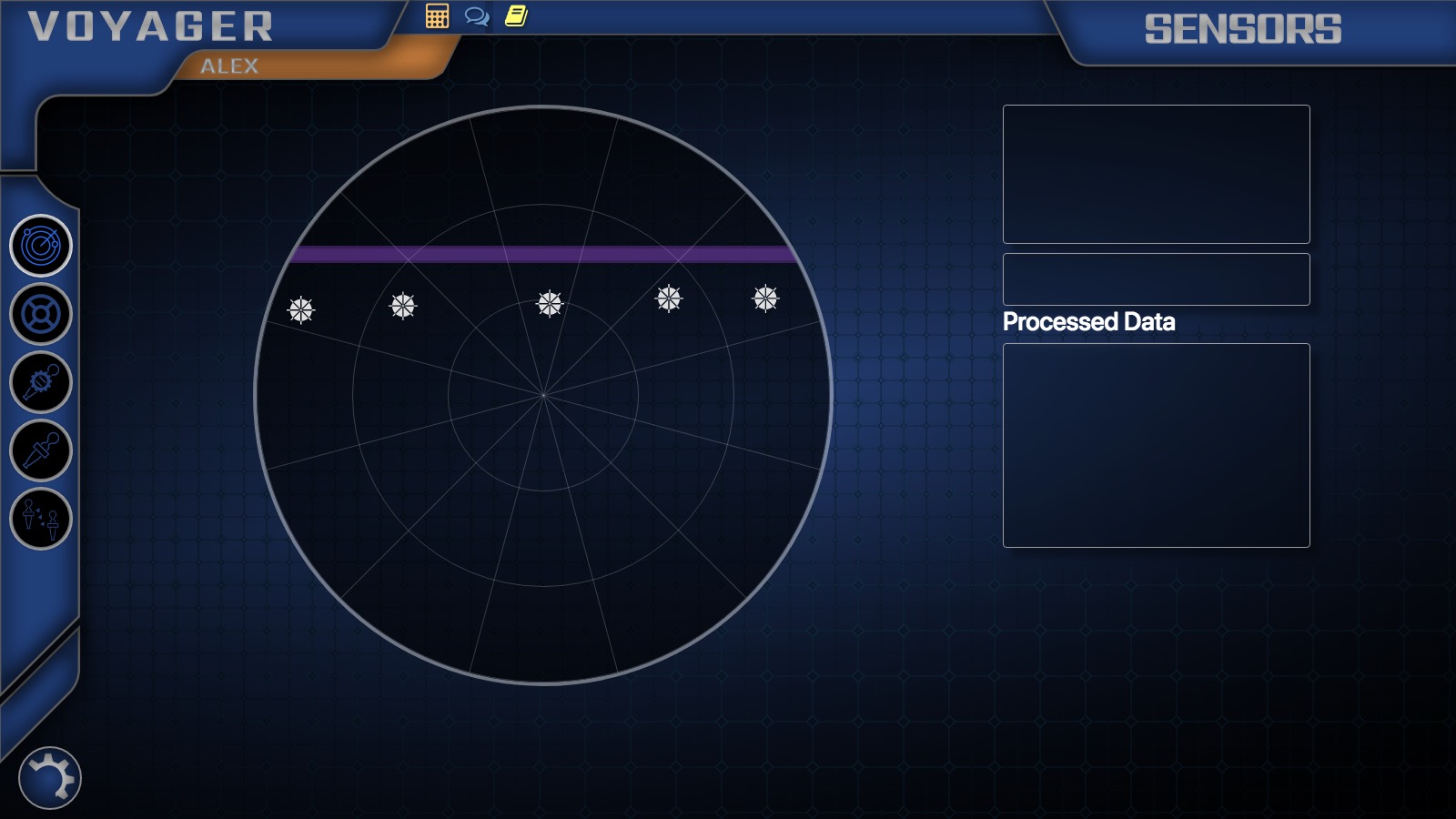 The sensors grid card also supports an alternate layout. This layout only appears when a) the 'Sensor Scans' card is not present on the station and b) the simulator does not use history-based scanning. 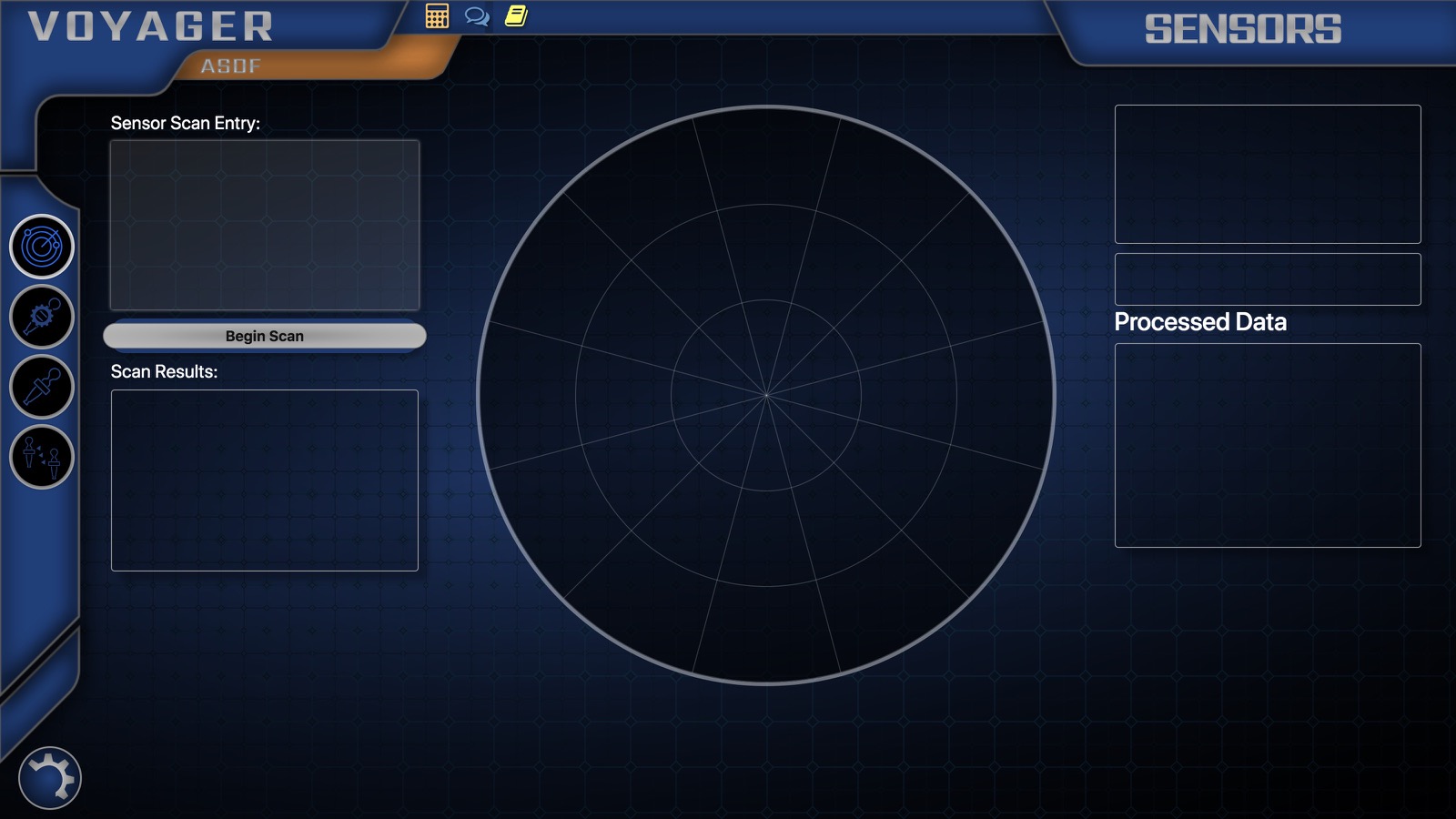 This screen is nearly identical, save for the sensor scan entry and results fields. Scans are requests made to the sensors system for additional information. They are typed in the upper field on the right. Once the sensors scan has been responded to by the Flight Director, the answer appears in the bottom field. 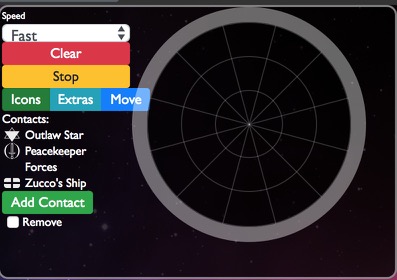 The core is divided into two sections: the config area and the grid itself. The grid is a 1-to-1 analog of the grid shown on the crew's station.

You can right-click on the contacts in the contact config to configure them. This allows you to change the label, icon, and picture, the size of the contact on the grid, and whether the contact is locked (or unmovable) or disabled (which appears as though static was on the contact). Dragging on the sensor grid over one or more contacts also gives you this menu, with one addition: Destroy will cause the contact to disappear in a small explosion.

The extras menu gives you several additional options for the sensor grid.

Nudging moves all sensor contacts (except those that are locked) in one direction, including rotating around the center. The nudge distance specifies how much the nudge will move the contacts. Clicking the arrow buttons repeatedly moves the contacts in that direction.

Ask for Speed makes it so dragging contacts does not move them until a speed has been chosen from a drop-down menu. Unchecked, the speed of the contact is determined from the dropdown menu at the top of the config area.

Add to targeting makes contacts automatically appear on the targeting grid if the contact is within the center circle of the sensor grid.

Auto Thrusters makes contacts move automatically based on the thruster movements of the ship. Speeds for those movements are controlled from the Thrusters core.

A small note indicates that you can option-click on segments of the grid to black them out. No contacts appear when that grid segment is blacked out.

Interference adds noise to the sensor grid, useful for indicating high radiation or other distrupting influences. From 0% to 50%, contacts on the grid are still mostly visible and can be clicked or hovered to see their identification. After 50%, the grid is too full of interference to be able to identify contacts.

The move menu shows a small circle with another circle in it. This allows you to move all of the contacts (except locked contacts) continuously in any direction. Just drag the center circle in the direction you want contacts to move. The distance from the center adjusts the speed at which the contacts move. The reset button will re-center the circle and stop movement.

Working with the Grid 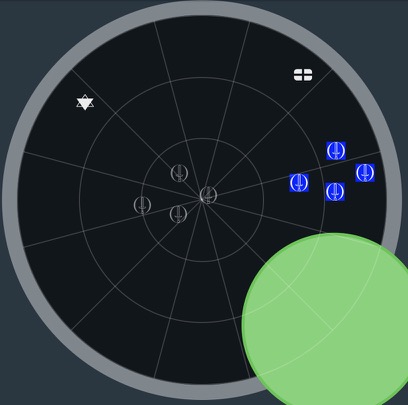 This shows a scene in action, with several contacts and a planet. The contacts hilited in blue have been selected. The ghosted transparent contacts indicate what is being shown on the crew's computer as the icons move across the grid. Bear that in mind as you use the sensors core.